You are here: Home / The Energy / Kailua Kop Wannabe 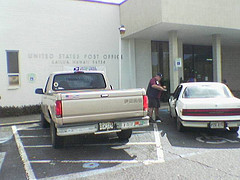 There is a citizen volunteer who has somehow been deputized here in Kailua to issue parking tickets. He seems to target folks who are misusing the handicap spaces. But on my two chance encounters with him one day, he was missing the point by a wide margin.

*Example Number 1: Kalapawai Market*
This is a “landmarket” in Kailua, barely a block from the beach. The traffic is in a constant state of flux all day, as people run in (literally in most cases) to grab some coffee and/or a sandwich and then get on to their jobs and their vacations. This group being easily categorized as “people in a hurry” they don’t always park perfectly within the lines. But they also do not linger, so it takes someone as vigilant as the KKW to catch someone who may be parked, say, a few inches over the line into the designated handicap space.

BAM! You’ve got a $250 parking ticket! Though he himself leaves his truck illegally on the Market’s premises while waiting to catch the sloppy parkers, he does not apparently ticket himself. The parking lot is for the express use of shoppers, not guys who go around wrecking other people’s days.

*Example Number 2: The Kailua Post Office*
You cannot find a more consistently friendly group of retail employees (well except maybe for Sally at Kalapawai) than the folks working the counters at our post office. “Going postal” would never happen here as our friendly folk must be fed aloha in triple dose for breakfast every day.

So what a strange coincidence to literally go from Kalapawai to the PO and see again, within minutes, the same parking guru (as he must think of himself…) Only this time, he had his big pickup truck parked in the loading zone between two handicap spaces, while issuing yet another $250 whopper!

As I walked in to get my mail, I saw an elderly woman _sitting in the car being ticketed_, with her very elderly male companion in the back seat, and her elderly female companion coming out of the PO. They had a handicap sticker! I commented to the KKW, “Umm, your truck is parked illegally. I think you’re missing the point here?” To which he replied, the lot was crowded. Hmmm. I looked up. Barely 50 feet away, still in the PO lot, there were three spaces. I pointed this out to him. He attempted to get me to go away, beefing up his air of authority.

Then I remembered I had my cell phone. So I started taking pictures.

He first finished issuing the ticket, then moved his truck to a legal parking spot. The elderly lady’s legal woe? Well, so what if she had a handicap sticker. It was 4 days expired. Bad girl!

The thing is, of course it’s not cool or kosher or kind to clog up a handicap space. But in example #1, the car was barely encroached, in space or in time. In example #2, these people were handicapped! Jeez. I wonder where they’ll dig up the funds for the ticket. Hopefully a judge will toss it, and the KKW will be arrested for a serious lack of aloha, not to mention parking illegally himself and confusing the letter for the spirit of the law.

I started this blog in 2004 to share my experiences as a student of consciousness. It covers a wild and wide range of my personal interests and experiences. I've been a coach, trainer, and podcaster across several disciplines. Thank you so much for visiting here.

Recently from the Blog:

Use code VISITOR to get your free copy.

In the Transition with Rox Podcast